Robots on the cheap! A fun little project to enjoy with your kids. This introduces them to simple circuits.

Here is my video tutorial!

All of this id available in small quantities on eBay at low cost.

Cut the handle off of your tooth brush and stick your motor to the toothbrush head.

Now add your battery using the sticky pad. Make sure the negative (black) contact for the motor is under the battery.

Tape down the other contact on the top of the battery. Your bot should buzz happily around table!

For more fun, slide two flashing LEDs for eyes on to each side of the battery under the tape (the long contact must be on the top of the battery).

We changed our climbing frame into Hot Wheels heaven for the afternoon using scrap. Let me take you on a tour!

We used all our junk to create shoots. We taped drain pipes and cardboard tubing to the climbing frame and even added a lift!

Our Geoboard made a great addition to the slide, sending the cars in all directions!

We added on our homemade Sensory Car Track made from scrap materials too!

We got a whole afternoons fun out of this!

My son became a fussy eater from the age of about two and a half and is currently four years of age. During this time the foods he would eat consistently narrowed. He would avoid all vegetables, salad and most fruits, rice, pasta and potato other than waffles, chips and croquettes. He would eat bread, baked beans, tinned spaghetti and fish fingers. All other meat went untouched.

I am a believer in serving up foods time and time again eaten or not, hoping that eventually they will start to eat them, and I am against giving alternatives when they are refused. As long as they have had the opportunity to eat, if they skip a meal so be it.

However over such a prolonged period I began to bend to the pressure of wanting him to eat something! The feeling when throwing out the food he had refused wore me down and the repertoire of meals I would serve shrank drastically.

The Stick Or The Carrot?

In the early days we tried the stick. Pressuring him to eat up and making him remain at the table. This was extremely negative and a very traumatic experience for us all and resulting in tantrums and awful scenes.

We quickly abandoned the stick and went for the carrot idea, promising rewards such as pictures for his reward chart and puddings for trying / eating certain foods. This actually got us nearly nowhere as my toddlers stubbornness was do strong that just trying anything new was out of the question and brought tears and tantrums.

Many meals skipped and much guilt and frustration later we may have turned a corner and it is so simple I am cursing myself for not thinking of it earlier.

Think about your own eating habits, what parts of a meal do you prefer or, eat first? With a nice Sunday Roast I always eat the Yorkshire pudding first and broccoli is defiantly last.

I had an idea to try and hold back one preferred item on a separate plate a basically use it as leverage to get him to try the vegetables and meats I new would normally be rejected.” No sugar snaps, no potato waffle”

This was of course met with tears and resistance the first time, but I stood my ground and he did try them in return for some if his favored food.

After each meal I decided to draw the foods he had tried on a chart and let him colour them in. I hoped in some way this could help the memory of these sink in and I rewarded him with pictures on his reward chart.

The second time was easier and the third was met with no complaints except haggling over how much he had to eat before he received some of his preferred food. Each time I pushed further to get him to eat more and to try foods further outside of his comfort zone.

Each time he ate something from his plate he was rewarded with a small amount of something he preferred. Once he had tried something he often decided it wasn’t so bad and was happier to eat some for the reward.

I’m counting this as a major breakthrough because I placed a bowl of pasta and Bolognese sauce in front if him this evening (no reward food) and he ate it. No argument. He then asked for more.

Anyone who has a fussy eater can imagine my relief!

Why the hell did I not think of this before!!!

I now have hope. And I also hope it helps someone else with a fussy eater. Every toddler and fussy eater is different so Good Luck and I feel your pain!

As the mother of a toddler I often look around my house & try to remember what it looked like before kids. I vaguely remember having a clean home once upon a time. I will be honest I have not been the best at keeping a tidy house since the birth of our daughter. I find it exhausting trying to keep her thousands of toys & books organized. This became even more the case once I started introducing sensory play and arts & crafts into our regular play. If you can get around the mess that will be made in your home from this kind of play, it can be very rewarding for you & your child.

My daughter loves arts & crafts, the messier the better, so when I found this craft in one of our library books that combined glue & glitter, I knew that she would have a…

Early Years STEM Activity:
Inspired by Squishy Circuits website we decided to play around with dough and the simplest equipment: Dough (shop bought play-doh or homemade salt dough), LEDs (from your local electronics shop or some old Christmas tree lights) and 9V batteries. If you have some crocodile clips it helps but it’s not essential!

Here is a circuit with out crocodile clips! To get your LEDs to light you need two separate pieces of dough connected to the two terminals on the battery and the LEDs have to connect the two pieces of dough to complete the circuit. LEDs only allow current to flow in one direction, so if they don’t light turn them around!

Dough play with a new twist! Could this be used to get daddies involved in dough play?

Tiny Adventurers enjoyed Big Collaborative Art this week. They were presented with some large random objects and trays of paint to freely experiment with.

We saw lots of printing and rolling!

Well done everyone! We love putting Big Art up on the wall. It’s so striking.

This is great fun and a nice progression from our Brush Robots!
Small motors are cheap at any electrical store as are the battery casings. I got mine from Maplins. Adding a plastic bottle top off centre causes the vibration. These can be easily and painlessly stopped with a finger while in motion. Here is a little video of one in action.

We’ve tried taping ours to margarine tub lids, paper cups, sponges and so on, observing each object glide across the floor. I was inspired to add the coloured pens to make three and four legged bots by this post from Science Buddies! I had to make adjustments to make it safe and accessible to 1-3 year olds. Thank You Science Buddies! It was great fun!

It’s Christmas Eve and the kids have spent some of the morning playing with the Nativity Discovery Box. We’ve had it around for the run up to Christmas and the kids are getting familiar with the Christmas story. We’ve added peppermint scented oats, hay, chopped tinsel and glass beads, just to keep it interesting. Our characters are peg people wrapped in wool. We’ve added mirror card and printed pictures of the nativity around the edges and star decorations. There is a lot of learning going on In this box! Fine motor skills, recall, literacy and William decides to count all the glass beads he finds. Well worth the sweeping up.

We moved magnetic items around our mirror board using magnets underneath. If your fridge magnets are a bit small put them in a child’s sock and knot the end. It’s lots of fun. Theirs also lots of fun to be had picking up the magnetic items and pushing the magnets together to feel them attract and repel.
Next we suspended paper clips in mid-air using magnetic attraction. The paper clips were tethered to a crate with cotton. This is super for practicing gross motor skills. The paper clips follow the magnet as it is moved and drop down when the distance between them and the magnet is increased. It took my three year old a few goes before he could hold the magnet steady, suspending the paper clip. My Two year old got lots of joy out of just picking up the paper clips!

His efforts payed off! “Look mummy, it’s not touching!”

Perfect pumpkin activity to keep your toddlers busy while fine tuning their motor skills. I took inspiration from geopumpkin ideas but modified ours to use golf tees, toy hammers and soft hair bands instead of elastic bands to reduce the risks of the little ones hurting themselves. We also added lots of pegs, ribbons and trinkets to decorate our pumpkins!

This activity was really popular and we used the pumpkins all week long! Happy hammering! 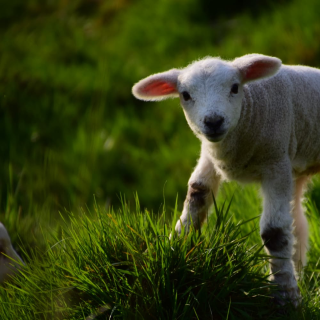